There are some moments in life, no matter how long ago, that can still give you a good punch in the gut every time you think about them. The moment I voluntarily jumped off a perfectly good airplane always does it for me.

Skydiving is no longer an uncommon experience; you’re bound to have a friend who’s done it, or you’ve taken the leap yourself. I’m here to detail exactly how it felt.

I had no plans of going when I visited my parents in San Antonio a few years ago, but a quick Google search of “fun things to do in San Antonio area while stuck with parents for a week” turned up a skydiving field in nearby San Marcos.

The jump site was nothing but a cluster of wooden box-like buildings in the middle of a vast, empty flatland. We knew we were in the right place because of their unique marquee: the broken remains of a small crashed plane, with big letters saying, “There’s no such thing as a perfectly good airplane. Learn to skydive.”

My stepdad Aaron is a retired Army colonel; he was as excited as I was. My mother, meanwhile, declared that while waiting for me to get my feet back on solid ground, she’d pass the time by passing out every now and then.

I joined a small group and put my harness and pink jumpsuit on. We were given a disconcertingly brief demo of things to try to remember to do as we fall to the earth: keep your chin up, keep your bum up, have fun and let your instructor worry about the rest.

We could only do tandem dives with certified instructors; they operated the parachute, and we — well, we were baggage. I didn’t think I would’ve had it any other way anyway, that is until I met my instructor: a tall, charming dude wearing a shirt, cargo shorts and flip-flops that he secured to his big toes with rubber bands. Can’t have them flying off on their own in the upper troposphere, you know.

I was about to ask why he didn’t just wear a jumpsuit and sneakers like the rest of us, but thought better of it when I smelled his breath, which positively reeked of beer. In hindsight, I think I thought better of the whole thing for a second there.

We filed into a small, disemboweled aircraft named “Old Maid.” I was so taut with anticipation I could feel every vibration the weather-beaten plane made as it rose to 11,000 feet. We began to circle and my instructor, tightly strapped to my back, deftly stood us both up and waddled toward the door, like some strange four-legged duck. Panic gripped me, and for a moment, the little voice inside my head reasserted itself and started screaming, “What the **** do you think you’re doing?!?”

I swallowed big gulps of air, now hanging off the side of the aircraft with the wind roaring in my ears, and heard another screaming voice: “It helps if you don’t look down!” My instructor, the genius.

Naturally, my eyes fixed themselves on the green, quilted landscape below, houses now nothing but scarce pinpoints, and for a weird second, I wondered if my mom passed out yet.

“How long have you been doing this again?” I shouted to the stranger stuck to my back, grasping for reassurance.

“Oh, about five minutes now,” he shouted back. Then he jumped. 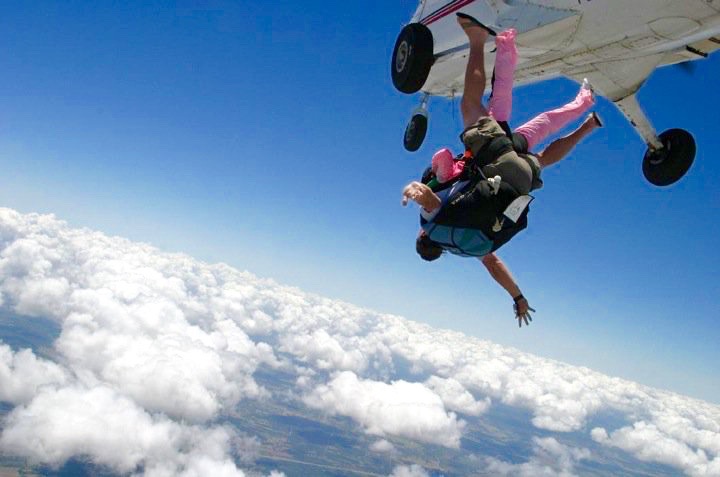 What they don’t tell you about jumping off a plane is that you change your mind the second you jump. A mortal fear of certain death overcame me as we hurtled down to earth, nothing but dead weight spat down by an uncaring sky, falling, falling, falling without end. Falling still with no signs of stopping. The free fall lasted ten seconds; it felt like hours.

Another thing they don’t tell you is you can’t hear anything but the wind. I’m pretty sure I was screaming my  throat out (I could feel it days later) but we were streaking through air so fast the wind tore the sound from my mouth before it could reach my ears. I remember a kaleidoscope of whirling greens and blues, the air resistance buffeting my flesh (my face looked like it was constantly being rearranged by invisible fingers) and my stomach perpetually clenched from screaming, but not one high-pitched shriek escaped my lips.

Then I felt a sudden drag, the pilot chute deployed, and we began to glide for what was the most pleasurable five minutes of the entire ordeal.

With the pilot chute providing some resistance, we slowed down considerably. I spread my arms wide, feeling a thick cushion of air under my belly, and stared bewilderingly at the bed of clouds below me. Below me. And then we were in the clouds, their pure coldness stinging my cheeks, invading my lungs. And right then, I tried to forever sear the moment in my memory, when there was nothing between me and fearsome Nature. Well, aside from a slightly drunk dive instructor and several pounds of gear.

We jerked back abruptly, the main parachute breaking our momentum like a hard foot on the brakes. I felt the breath knocked out of me as the harness cut painfully into my chest. The wind wasn’t so loud now, and I could hear my instructor saying we could stay up there like that longer because I was light. He steered the chute this way and that, drifting closer to earth.

I pulled my knees up as we landed, and he took the brunt of the force. And just like that, we were back on solid ground, meters away from my pale-faced mom.

“That was awesome!” I shrieked.

“Think you’ll do it again?” asked my instructor, whose name, I then learned, was Ryan.

They said there’s no such thing as a perfectly good airplane, but even if there was, jumping off of one guarantees a memory of gut-punching quality for a long, long time. 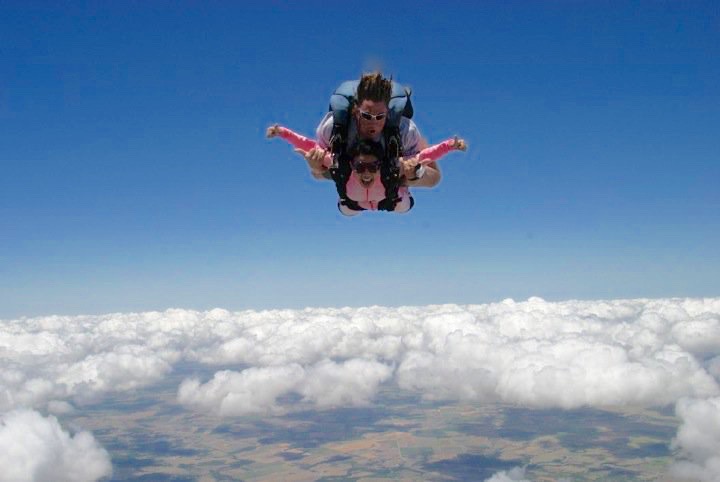 What do you think? Leave a note. Cancel reply